There is more good news in the world than bad

Many people have heard of the organization Habitat for Humanity. but know little else about them. Habitat is an organization that recruits volunteers to build homes and provide hope for people who cannot afford to buy a home of their own.

Habitat was started in Atlanta, Georgia in 1976 by Linda and Millard Hubbard, two committed Christians who wanted to provide HOPE and make housing affordable to those in need. 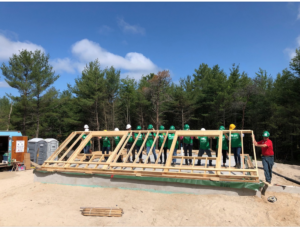 Habitat operates in many countries and according to Wikipedia, they have helped more than 29 million people construct, rehabilitate or preserve homes since 1976. Many of the volunteers are retired. Many are from corporations who have their employees assist in building. There are also service clubs such as Rotary who have their members volunteer, and youth and church groups who often participate in the building.

Habitat relies on donations from individuals, corporations, church groups, and sometimes government. and the mortgage payments from Habitat Partner Families who are enjoying and buying their own home.

Qualifying for a home is by competitive application. The applicant families must demonstrate a need for housing and have regular employment so they can pay the mortgage. The down payment on the home is 500 volunteer hours. The family buys the house with a 20-year mortgage and municipal tax payment is about 25 – 30% of the employment income. Neither race nor religion is a factor in choosing the recipients.

According to Habitat’s literature, apart from the joys and benefits of home ownership, Habitat has found those who buy Habitat homes enjoy better health, education, employment prospects and are even less reliant on social services.

Habitat estimates every home built helps create $175,000 worth of benefits for society.  This does not include the improved feeling of community and satisfaction in participating in a worthwhile endeavour together. 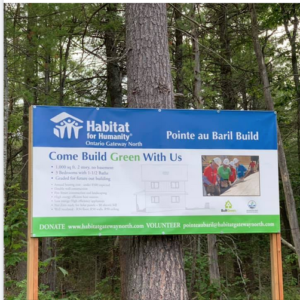 While hundreds of homes are being built at any one time, I would like to highlight a recent GOOD NEWS BUILD in Point Au Baril, a small community of about 500 year round residents and 3000 cottagers on north east Georgian Bay some 3 hours drive north of Toronto.

This particular project, while containing the usual attributes of volunteers and recipients collaborating, also has an outstanding green component. The partner family Myesha Collins and Josh Halsall and 2 infant children lived in the village in a one room winterized porch with limited facilities. Myesha is a member of the nearby Shawanaga First Nations. 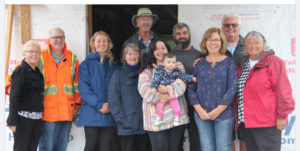 The 1100 square foot, three bedroom, two storey home was built by over 100 volunteers, lead by Rob Muir, a seasonal cottager from Annapolis Md, who has done Habitat projects across the USA and internationally. The experienced Habitat crew leaders were from Florida, Connecticut, Ohio, Toronto, Parry Sound and the village. There was also strong support from the local businesses, trade suppliers, the church and First Nations organizations. The largest groups of volunteers was the weekly ladies kayak group. Volunteers and donors were both full time residents and cottagers.

The Green component was driven by Bob Fisher and his son Graham. Bob is an experienced advisor on residential energy and has a volunteered with Habitat for 20+ years. Graham is certified Passive House Consultant and advises and builds energy efficient housing.

Using double wall frame construction, regular construction techniques and materials such as insulating with recycled cellulose, and extra attention to sealing the building shell, the result is a new home that has estimated annual heating costs of less than $500. 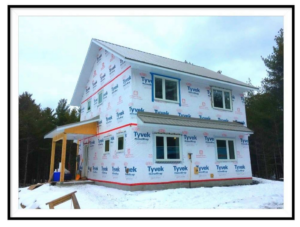 While the building of a home for the Collins and Halsall family is in itself a good news story, the collaboration of village, cottagers, suppliers, the First Nations and others is a plus.

The icing on the cake though to me though, is that the building of a low-cost, energy efficient home, designed by volunteers, makes it an even better good news story.