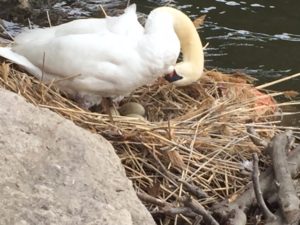 A big attraction of late for walkers in the Port Credit harbour area of Mississauga is watching a Mother swan building a nest and laying and warming her eggs. They now number seven.

One morning two interested observers, both older men, and a truck arrived bringing straw. Others brought sandbags. The straw was placed by the nest and the sandbags were put in the water to protect the nest. The mother swan quickly added this newfound straw to her nest. All are waiting hopefully to see what happens to the eggs. They take 36-41 days to hatch. 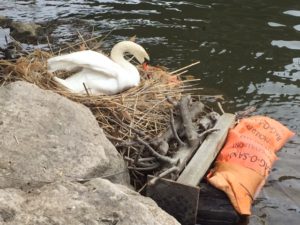 This is a touching story and a wonderful example of an anticipated bad news situation being responded to by some people who cared.

As I looked back over the blogs I have written, the good news stories I have told are mostly in response to bad news, or potentially bad news situations. These include:

• The development of a vaccine to offset COVID and other diseases polio, smallpox, measles etc. (Dec 2020)
• Food programs created to feed the hungry such as in Yemen (Oct 2020)
• Caregivers responding to the needs of those in distress, the most recent example being in India where people are rallying together to help because the health care system cannot cope (March 2020)
• A young boy of 16 survives a Killing Field in Cambodia during the Pol Pot genocide, is rescued, brought to the U.S.A., has a successful career and returns to Cambodia to build a vocational school. The building was done largely by Canadian volunteers from Rotary, many in their 70s, who paid their own way to get there (Jan and Feb 2019)
• During COVID teachers doing cartwheels to teach their students and ensure their students receive appropriate recognition and celebration on their graduation day (July2020)
• People raising money to help children go to camp (May2020)
• Indigenous people in the Maritimes taking charge of their educational system and having a higher success rates than non-indigenous peoples. These same people have just bought control of a major Fishing Company (Jan. 2021) 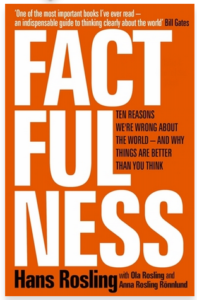 In fact, according to Hans Rosling, a now deceased Doctor of Public Health from Sweden in his book “Factfulness: 10 Reasons We Are Wrong About the World – and Why Things Are Better Than You Think.” despaired at the lack of awareness in the world of the improvement in people’s lives that had happened, mostly because of people doing good things.

Most people were not aware of many facts including the world is not made up of just the rich and poor – there are many in between and their lives are improving all the time.

The world has fewer wars, crime is down, women are being better educated, there are fewer children dying before the age of five, the number of people living in abject poverty is down considerably and people are living longer*   Climate change is happening and we are responding.

Rosling, though, is very emphatic that just because we are better off than we think, we still need to keep on making improvements.

I could go on but because people respond to and/or anticipate bad events we are clearly in a better place than our forefathers.

I challenge you over the next little while to take some of the bad news being fed to us regularly and find a good news story associated with it. I further challenge you to participate in or find your own “Swan” and create your own Good News Happenings.

* Many of the negative beliefs people have Rosling states are magnified by the media’s stories and images, our built-in genetic propensity to believe negative things and our habit of confirmation bias
His book Factfulness (Flatiron books), based on facts and written with his son and daughter in law, is touted by Bill Gates as one of the best books he’s ever read.

Another book on this subject to read is Enlightenment Now (Penguin) by Harvard Prof Stephen Pinker. He too believes the world is in a better place and is because we humans for the past 200 plus years have been applying a combination of reason, science and humanism to make this happen. The way ahead is more of the same.

Volunteering: Good News for All