Sports and Athletes Inspire Us and Bring Us All Together

Sports have many attributes, including the power to pull people and countries together, especially if it is a team or high-end athletic event such as the Olympics. Athletes are also great sources of inspiration.

Think of the Montreal Canadians. They did make it to the Stanley Cup finals. For a few weeks they were Canada’s team.

The Toronto Raptors did this several years ago en route to winning the NBA Championship. Back in 1992, The Blue Jays had sports fans coming out of the woodwork, including some who knew nothing about baseball! Margaret Atwood, who was not a sports fan under normal circumstances, wrote with great fondness about Tom Heinke, Tony Fernandez, Roberto Alamar and other Jays players as they took on and beat the Atlanta Braves in the World Series.

Remember the 2010 Olympic Hockey final in Vancouver when Canada won the Gold medal against the U.S.A. and the Canadian Women’s Gold medal game holding off the Americans, in spite of playing shorthanded for a large part of the final period because of some very questionable refereeing?

The best of them all, however, was the 1972 Hockey Series between Canada and Russia when Paul Henderson scored in the final moments of the game. It was one of those events people can tell you where they were the moment Foster Hewitt cried out., “Henderson shoots, he scores!”

These moments of elation are, however, not limited to Canadians and relatively wealthy people.

I have been in the famed Dharavi slum in Bombay where a high percentage of the million people who lived there were watching a World Cup cricket match on a big screen when India beat Pakistan.  Their elation in comparison made the Canada-Russia game look like a league event.

More recently Italians everywhere were unified as their football (soccer team) team beat England in the European Cup soccer final on a shootout.

This intense team love though can sometimes work in reverse if your team loses. The racist comments made to Black players on England’s team, blaming them for the loss is an example of fan support gone ugly. Or at a soccer game in some places where people are lined up with fire hoses on the far side of a moat protecting the field and you do not dare cheer for your team in your competitor’s seating area.

Unfortunately, negative reactions at sporting events can have dire consequences. In fact, fatal shootings are known to have happened at some of these matches.

As you read this, many of us will be watching the Olympics, cheering for Canadian athletes and standing with pride when our national anthem, “O Canada,” is played in recognition of a gold medal.
These events unite us. Not only do they celebrate winning, they recognize values we cherish: skill, hard work, perseverance, teamwork, good sportsmanship and overcoming obstacles, particularly this year with COVID.

Who wasn’t cheering in 2016 for Andre De Grasse in the Rio Olympics as he won three medals in the 100 and 200 meters? However, one could not help recognize and praise the awesome speed and power of Usain Bolt, as he looked over his shoulder at De Grasse, who only a few years before had never run a competitive race, giving him a wink and nod of, “Way to go!” in recognition as they crossed the finish line.

And of course, Penny Oleksiak the 16-year-old who came out of nowhere, but with youthful desire and determination, won 4 medals. At age 9 she could not even swim the length of a pool.

Although there are instances of bad sportsmanship, there are also many examples of good sportsmanship, such as in the 2014 Winter Olympics when a Canadian coach handed a ski pole to a Russian skier who had broken a ski, allowing him to finish the race. 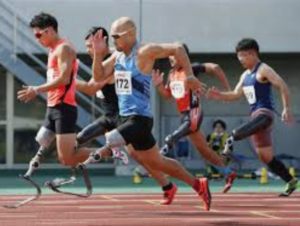 Then there are the Paralympic Games. Not only are they exciting to watch, but it can also be inspiring to witness the amazing effort of these athletes.

Sports has many attributes: fitness, health, the development of life skills – especially for young people – camaraderie, teamwork and striving to get better, just to name a few.

All of these Olympic athletes have worked hard to get to Tokyo, and to be the best at what they do.  While only a few will win a medal, they are an inspiration to us all as they all strive to become stronger and go higher and faster.

Even if you are not an athlete or sports fan, we all owe a big thanks to sports and athletes for being a positive force in our lives, regardless of whether you are rich or poor, young or old, male or female.
Will you be watching the Olympics? Just today, a homeless person in downtown Toronto asked me if I was going to watch the Olympics.  He is … and I am.  That is Good News.

The Legacy of Good Stories From Tokyo