There is More Good News in the World Than Bad

Good Morning. I must admit sometimes I feel as if I am alone, blowing in the wind about there being more good news in the world than bad.

Several weeks ago, I received the attached video clip from a friend. It is by Charles Groenhuijsen, a well-known Swedish journalist, about the reporting of news.

After watching it I felt vindicated, particularly about how the news media reports news.  Have a look. It is about 4 minutes long. https://www.youtube.com/watch?v=1lJRm1wKVXk

There have, of course, been many other good news stories. Here is a snapshot of several:

1. According to the U.S. Information Administration, almost 50% of the new utility scale electric capacity coming online in the U.S. in 2022 is solar, an increase of 21.5% over 2021. Believe it or not, the geographical area showing the biggest increase is in oil rich Texas with California in second place. Wind is expected to provide 17% of the new green energy to be launched in 2022.

2. The January 24th Globe and Mail had an article about a recently reached agreement between the Nanwakolas Council, representing four First Nations in B.C. and Western Forest Products. The agreement temporarily halted the logging of old growth forests on 2500 hectares (62000 acres) of old growth forest.

It is anticipated this agreement will assist in re-framing logging rules in B.C., leading to the First Nations participating in revenue sharing and possible part ownership of the company. This is the first agreement under the B.C. plan to suspend logging in an old growth forest area, the saving of old growth forests is a hotly disputed issue and to date has resulted in over 1000 arrests. Sounds like progress and good news to me. 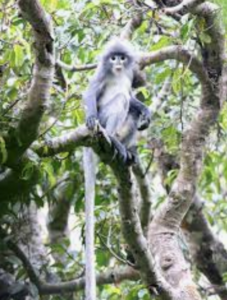 3. Keeping with our environmental theme, The World Wildlife Fund has just discovered a new monkey (Popa Langur) in the Mekong Delta area of Vietnam. There are only 200 of these monkeys in existence and they are located in only a few spots in South East Asia. They may be placed on the endangered species list shortly.

The World Wildlife Federation have also just discovered 155 new plant species and dozens of fish and reptiles, previously unknown in the very bio-diverse area of the Delta. The Delta, best known for its importance during the Vietnam war, is home to over 20,000 different plant species, 1200 kinds of birds, 800 reptiles and amphibians and 430 mammals, including 350 tigers and 700 pound catfish.

4. And closer to home there is a good news story out of Bayfield, Ontario. Bonnie O`Reilly, a local resident, recently gave her kidney to Graham Nesbitt, the manager of the town’s arena. Graham had been very helpful in advancing her son Ryan’s hockey career through the hockey ranks.
Ryan is the Captain of the 2019 Stanley Cup champions, The St Louis Blues.

Of note, Bonnie and her husband, both social workers, also served as foster parents to 47 children.

Well that’s all the good news and happenings for now.

As Charles Groenhuijsen says, “It is your choice as to what news you focus on.”

The Uplifting and Life-Giving Life of Dr. Paul Farmer