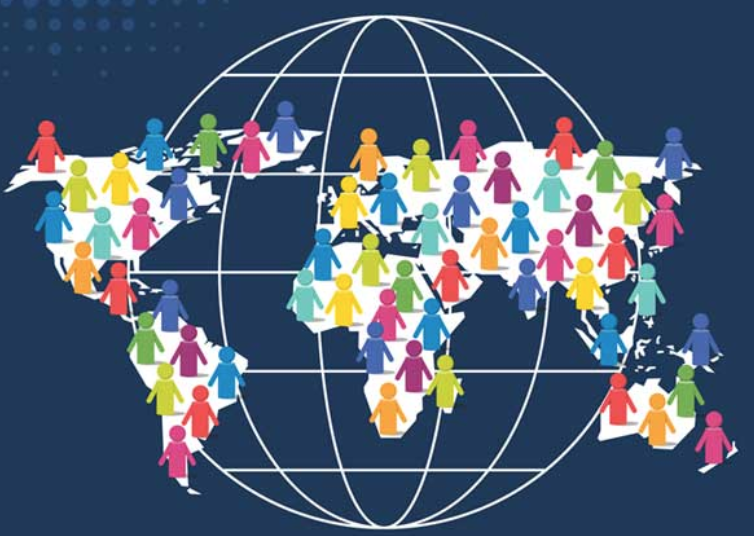 There is More Good News Than Bad

Long before I started writing this GOOD NEWS blog I would marvel at the fact that with approximately 7.5 billion people in the world (and it is increasing at about 1% per year), that we humans get along as well as we do.

Some may disagree and point to the wars (the Ukraine, in particular). In fact, in general, wars and casualties are well down.*  They also point to the number of other issues we disagree about which are reported incessantly in the media.  In reality, however, we humans somehow seem to work out our differences or learn to live with them. When you think about it, with 7.5 billion people it would  be impossible  for everyone to get along all of the time.

It has been my experience there can be differences in opinion any time you get two or more people together. I believe differences of opinion make us better people, bring out new ideas and make us more creative.

There are though many things that help hold us all together. These include:   1) living by the Rule of Law, 2) local and international institutions and 3) the sharing of good values.

We have many institutions in this world, many of which have been created since WW2 to deal with local and international issues. These institutions, among other things, create a forum for dialogue and a process for dealing with and preventing problems.

They also provide opportunities to develop friendships, share learning experiences and get to know and understand each other through people exchanges. These include but are not limited to hospitals, inter government collaboration, associations, educational institutions and businesses.

Perhaps the most noteworthy is the U.N. and its many agencies **

Values guide us in our decision making and the sharing of good values creates trust.  Working together and being guided by common values probably has the potential for the greatest positive impact.  Furthermore, the sharing of values is carried out many times every day in the decisions and actions of everyone.

For me, many of these values come together through the Golden Rule which is commonly stated as, “Do unto others as you would have them do unto you.”  This rule can be applied in such simple actions as holding the door open for someone or listening intently to what someone is saying.

What makes this so powerful is the positive impact you personally can make in your and other persons’ lives. What is also powerful is it is a core moral value in virtually every religion in the world.  Here is a list of how various religions state THE GOLDEN RULE: ***

CHRISTIANITY:   Treat others the way you would like them to treat you.

JUDAISM:  What is hateful to you, do not do to your fellow man. This is the entire law; all the rest is commentary.

BUDDHISM:  Hurt not others in ways that you yourself would find hurtful.

HINDUISM:  This is the sum of duty; do naught unto others what you would not have them do unto you.

ZOROASTRIANISM: Whatever is disagreeable to yourself do not do unto others.

CONFUCIANISM: Do unto others what you would not have them do want done to you.

BAHAI: And if thine eyes be turned toward justice, choose thou for thy neighbour that which thou chooses for thyself.

JAINISM:  A man should wander about treating all creatures as he himself would be treated.

YORUBA PROVERB (NIGERIA): One going to take a pointed stick to pinch a bird should first try it on himself to feel how it hurts.

Here are two recent news stories, one using the Golden Rule… one not.

A doctor in the U.S. south west when asked by a journalist how he would handle a certain controversial medical practice said, “All I do is think of the Golden Rule when I work with my patients.”

Vladimir Putin, a day after signing an agreement with the Ukraine to allow grain exports, fires missiles on Odessa, the port from where the food is being exported.

*Gwynne Dyer in his book, “The Shortest History of War”, says deaths from wars are now in the low hundreds of thousands per year, down from 1 million per month in 1945. Many of the wars that now take place are small in size and many are internal. Note: This book was written before the war in Ukraine started. Casualties in the Ukrainian war are unknown, however, in spite of all of the pictures of bombed out buildings, casualties appear to be much lower compared to the world wars. The C.I.A. recently estimated 15,000 Russians had been killed and 45,000 wounded since inception. Ukrainian figures are unknown.

In the battle of the Somme in W.W. 1, over 4.5 months more than 1 million men were killed or wounded. Deaths from war are much less than traffic deaths. In spite of this, military spending is up.

**  The positive impact on people all over the world of such U.N. agencies such as, UNICEF, UNHCR, The World Food Programme, Unesco, FAO and, The General Assembly is enormous.

The Security Council on the other hand has been ineffective because of design flaws that gives certain Security Council members the right of veto This flaw was known from the outset but was a tradeoff to bring about the creation of the U.N.

There are many who do not follow any of these religions and might call themselves Agnostics, Atheists, Humanists or Secularists.

These people generally do not believe in a God, but it is generally agreed they follow the credo of the GOLDEN RULE

How to be On the Right Side of Indigenous History

YOU, THE YOUNG and CHANGING THE WORLD