There is More Good in the World Than Bad: 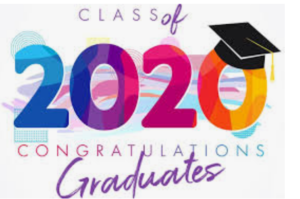 The past three months had been pretty much of a drag for Emmanuel (known as Manny to his friends).  As a result of COVID he had had little contact with his friends, he had not been able to play his sports and the online education he was receiving did not come close to what he was used to at school.

He was also a bit down because summer camp, the highlight of his year, was not happening.

Manny was a good student and he did not have to worry about his marks, however, the online learning fell short.

This was no fault of his teacher, who had been forced to come up in a few days with a whole new way of teaching 28 students. In fact, much of her material was very creative and educational. Nor was it the fault of his parents who were having to work remotely, look after their children and keep their eye on their parents who were in a riskier age bracket.

One morning Manny heard his dogs suddenly bark. There was someone at his door.  This was unusual. Who could it be? It was his teacher.

“Is this where Emmanuel the graduate lives?” Of course, she knew Manny lived there.  Furthermore, she was carrying a lawn sign which said, “Emmanuel a graduate of  Nelson Hill* public school lives here.”  (*fictitious)

She had 28 of these to deliver to all of the students in her Grade Eight class. Manny and his Mom put up the sign on their lawn. This made Manny feel pretty good!

He had never had his name on a sign before, and certainly not one which was there for all of the people going by to see. Furthermore, it made him realize he was moving into the next facet of his education: HIGH SCHOOL. 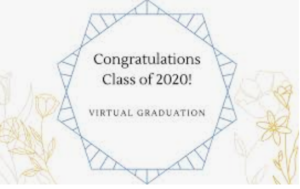 This was not the end of it. The next week flew by, as the day of his virtual graduation event approached. What would it look like, he wondered?

Graduation was to be a Zoom event. As he sat there in his living room watching, he saw many of his classmates for the first time in three months.

Finally, the ceremony started with opening remarks from the Principal and then the handing out of the diplomas.  This was done very creatively as each student, starting with the letter A, received a diploma in their right hand then passed it to the left. (This had been pre-recorded on a video and the videos linked together to make it appear they were all in one line and actually handing the certificate to someone else).

Since his last name was in the middle of the alphabet, he had an anxious wait. Would he be there? Would his picture be left out in error?  Maybe he would not even graduate.

Finally, there he was: Emmanuel Lorento (a fictitious name) standing in his good clothes and mortar board hat, passing the diploma on to the next person. Relief!!!

The virtual performance shifted to his teacher, then to an educator who gave a graduation, “Way to go!” student speech, talking about what they might remember and learn from this historic time, how they had to be flexible and creative and often find things to do on their own.

The ceremony then shifted to giving out awards. Manny was a good student and thought he might get an award.  As it turned out, he was nominated for six and received two. He was also flattered by remarks from fellow students and teachers about what his future would look like.

To wind up the program, the organizers of the event had obtained some pictures of each student when they were young compared with now. This gave rise to many laughs and giggles.

The whole event made Manny feel good about himself, cared for, gave him a good feeling about school and was fun to watch. 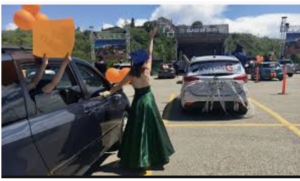 Similar ceremonies with variations were held for Grade Eight, High School and University Graduates across Canada and the U.S.A. Some were carried out in the traditional way, some were virtual, and some were carried out in front of their cars which were spaced out in a field. There was one I saw done at a drive-in theatre with everyone’s picture appearing on a huge screen.

None of these graduation ceremonies would have happened were it not for the thousands of caring teachers and parents, volunteers and others who wanted the best for these young people. 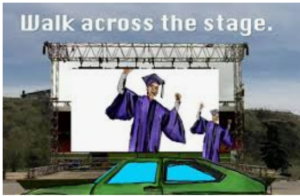 Kudos also should go to the people who invented the technology, those who put the technology together to make it happen, and of course the students (our leaders of tomorrow).

Graduation could easily have been a non-event with certificates sent by mail. It was not.

This, to me, is GOOD NEWS and GOOD HAPPENING EVENT.  Is it to you?

A huge “Thank You” to all those who made these graduation ceremonies happen.  I am sure your efforts made you feel happy too!